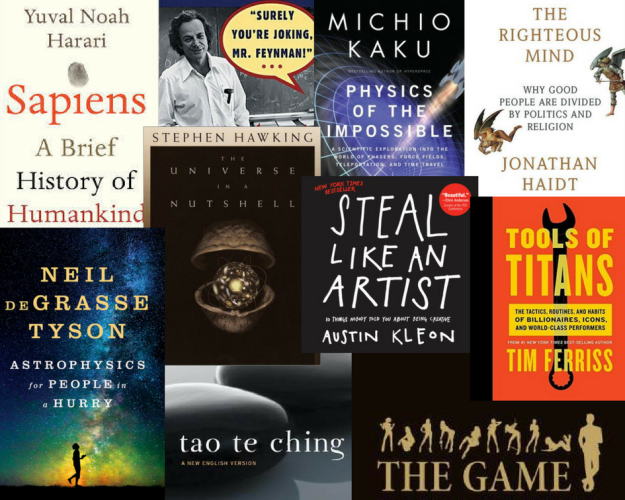 I tend to consume most of my non-fiction content through podcasts, which I like because non-fiction authors are often guests, and they summarize their books in their own words in about an hour. That allows me to learn more in less time. Then when I hear an author or subject I am especially interested in, I can delve deeper by reading their full book. That was the case with many of the non-fiction books I read in 2017.

1. Sapiens: A Brief History of Humankind by Yuval Noah Harari (2014)

This is an absolute work of genius—one of the best books I’ve ever read. Harari provides a mind-blowing history of humanity, explaining how and why we became the species we are today. Sapiens should be required reading for all homo sapiens to better understand themselves, others, and society.

2. The Righteous Mind: Why Good People are Divided by Politics and Religion by Jonathan Haidt (2012)

In this book, Haidt provides the best explanation I’ve heard for the current political divide in the country (and world). The conflict stems much deeper than politics to one’s morality and the way they see the world, which is more genetic and evolutionarily ingrained than most people realize. Reading this book, or even just watching Haidt’s TED Talk, can help both liberals and conservatives better understand the other side.

3. The Game: Penetrating the Secret Society of Pickup Artists by Neil Strauss (2005)

In this controversial book, Strauss details his experience infiltrating the community of pickup artists. The book is often misunderstood as a “how-to” guide for men to manipulate women to have sex with them, but if you read the book, you’ll realize that Strauss is not condoning this behavior. The book actually shows just how empty and troubled these pickup artists are. More than anything, The Game is a compelling page-turner of a story. Neil Strauss is a superb writer.

I hadn’t known much about Feynman before reading this, other than he was a scientist involved in the Manhattan Project, but after hearing the book recommended so many times, I had to see why. Feynman is definitely a curious character. Not only was he a scientific genius, but a practical joker, safe-cracker, musician, and painter. There is surprisingly little science in this book—it’s more of a collection of humorous anecdotes from the numerous adventures and odd situations Feynman found himself in. He lived quite a life.

5. Physics of the Impossible: A Scientific Exploration into the World of Phasers, Force Fields, Teleportation, and Time Travel by Michio Kaku (2008)

Now, this is a book that is heavy on the science and physics, but in an accessible, easy to understand way. As somebody who writes science fiction, I think it’s important to try to incorporate accurate science as much as possible. Physics of the Impossible is like a handbook for sci-fi writers, covering all the most fun and speculative topics in science like time travel, space travel, and parallel universes.

6. Tools of Titans: The Tactics, Routines, and Habits of Billionaires, Icons, and World-Class Performers by Tim Ferriss (2016)

Tim Ferriss hosts one of my favorite podcasts, and this book assembles the lessons learned from his best guests, which also happen to be some of the most successful people in the world in business, science, technology, sports, art, and entertainment. If you want to get better at life, I’d recommend any of Tim’s books and podcasts.

It blows my mind that a book full of such wisdom could have been written so long ago. This is a short book full of amazing quotes such as:

The title is fitting as this is a small book, but it is packed with information. Hawking, one of the most brilliant minds in human history, writes about complex topics like quantum mechanics, relativity, black holes, and time travel in a simple way.

9. Astrophysics for People in a Hurry by Neil deGrasse Tyson (2017)

I’ve been a long-time fan of Neil—a loyal listener to his Startalk podcast, and watcher of his TV show, Cosmos—but this is the first book of his that I’ve read. It’s a nice, brief introduction to astrophysics and the formation of the universe.

10. Steal Like an Artist: 10 Things Nobody Told You About Being Creative by Austin Kleon (2010)

A short but sweet book full of wise advice for artists or anyone trying to be creative (which should be everyone).