With Blade Runner 2049 coming out, I rewatched the original in preparation. I got to see The Final Cut on the big screen for the first time, and it was an incredible experience. For the past dozen years or so, Blade Runner has been one of my favorite films and a major inspiration on my writing, particularly the way it fuses science fiction with noir (my two favorite genres). Blade Runner wasn’t always a favorite movie of mine, however. The first time I saw it, sometime around 2005, I just didn’t get it. But after hearing Christopher Nolan, praise Blade Runner as his favorite film, I figured I must have been missing something, so a couple years later I gave it another shot.

So what happened that first time around? Why didn’t I fall in love with Blade Runner right away, and why do some people still not get it? I think there are several reasons:

The world is so rich and complex that you need multiple viewings to absorb everything on the screen, let alone catch all the dialogue, much of which is scientific terms or futuristic slang that could be difficult to decipher.

Compared to modern movies, Blade Runner is deliberate and slow-moving. You may hear there are flying cars and robots and expect a kids’ action movie, but it is actually a sophisticated philosophical movie meant for adults. When you get used to the pace, you realize it helps set the mood and enhances the experience.

The script has very little exposition (not counting the theatrical cut with voiceover). Instead of spelling everything out, the audience is left to connect the dots themselves. Which takes work—and probably multiple viewings. At first, I was often confused what was happening, but now everything makes perfect sense.

There are no black and white good guys and bad guys. Instead, there’s a whole lot of gray. Which can make narrow-minded audiences unsure who to root for. Is Deckard a replicant? Does it matter?

The director’s cut does not have a crowd-pleasing happy ending, which can bother certain viewers looking for a simplistic story, like I often did when I was younger. As I matured, I began to appreciate movies with more ambiguous endings that reflect the complicated nature of real life.

That explains why some people may not appreciate Blade Runner, but what is it that makes the movie so special?

Director Ridley Scott and his production team, including Syd Mead and Douglas Trumbull, created a vision of the future. They used all practical effects (no CGI) which made it feel more real—like the Los Angeles of 2019, always dark and raining, full of skyscrapers and neon lights, was a real place. Even today, 35 years later, the visual effects still look impressive. They basically invented a look of the future that so many designers in the real world have copied since. You could pause the film on just about any frame and print out the image to hang on your wall as art.

More than anything, the film just flat-out looks cool. I could stare at spinners flying through that mega cityscape for hours.

Vangelis’s synth score was equally influential. The music sounds like it came from the future. What’s unique about Blade Runner is the visuals are so amazing, you could watch the film on mute. But at the same time, the score is so amazing, you could listen to the film with your eyes closed. The best movies provide equally great audio AND visual experiences—like Blade Runner does.

Harrison Ford is the star of the film and gives a fine performance as Rick Deckard. Sean Young is fantastic as Rachael, his android love interest. Edward James Olmos as Gaff, Daryl Hannah as Pris, William Sanderson as J.F. Sebastian, and Joe Turkel as Tyrell are all great as well. But it’s Rutger Hauer who truly shines as the antagonist, killer android, Roy Batty. At the end of the film, he gives one of the greatest monologues in cinematic history, which he reportedly improvised:

“I’ve seen things you people wouldn’t believe. Attack ships on fire off the shoulder of Orion. I watched C-beams glitter in the dark near the Tannhauser gate. All those moments will be lost in time… like tears in rain.”

The script is great, written by Hampton Fancher and David Webb Peoples, including additional classic lines like:

“If only you could see what I’ve seen with your eyes.”

But the true genius behind the story is the author of the book the film was based upon: Do Androids Dream of Electric Sheep? by Philip K. Dick. PKD is one of the most imaginative science fiction authors ever, and although Blade Runner varies widely from his novel, the movie could not exist without him.

Blade Runner touches on the deepest questions of life and what it means to be human. How far would you go to prolong your life? What would you say and do if you met your maker? If we create a robot that is completely indistinguishable from a human, is it human? Do “artificial” humans deserve “natural” human rights? Do androids dream of electric sheep? These questions have only grown in relevance since the movie was made in 1982. AI continues to get more advanced each year, and the lines between human and machine become more blurred. 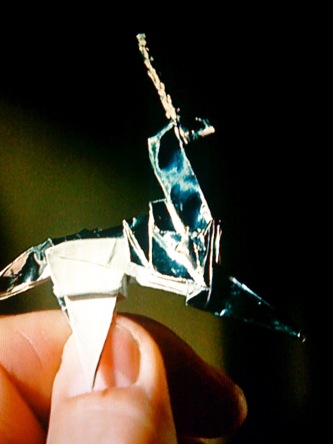 Blade Runner is one of the rare gems of a movie where everything came together perfectly. It shows the power of cinema as an art form because movies combine every other art form: acting, performance, writing, poetry, music, dance, photography, videography, lighting, fashion, clothing, architecture, carpentry, drawing, painting, animation, sculpture, and graphic design. The best films utilize all these facets to create a fully immersive cinematic experience, and Blade Runner achieved just that.

6 thoughts on “Why Blade Runner is a Cinematic Masterpiece”