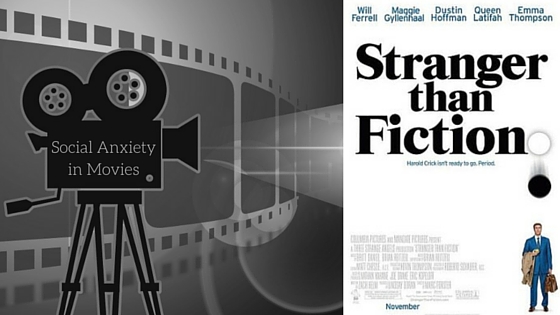 Stranger Than Fiction is about Harold Crick, (Will Ferrell) a lonely introverted accountant who begins hearing a voice narrate his life. He discovers the voice is an author, (Emma Thompson) and he is a character in her latest novel. Everything she writes about him comes true, so Harold grows concerned when she writes that he is soon going to die.

We see Harold acting very reserved, soft-spoken, and quiet. He spends most of his time alone, speaking to few people, and has no apparent friends. These are all common signs of social anxiety.

Harold lived a life of solitude. Harold would walk home alone… He would eat alone… And at precisely 11:13 every night, Harold would go to bed alone…

Living a life of solitude doesn’t necessarily mean one has social anxiety. Some people are perfectly happy alone. Though considering Harold later enjoys spending time with Ana, social anxiety may have been holding him back from relationships and experiences in life.

I’m cursing you, you stupid voice! So shut up and leave me alone!!!

The narrator’s voice is almost like our own inner voices that give us self-critical thoughts which fuel social anxiety. We may want the voice to shut up, but it’s difficult to control our own thoughts. Cognitive behavior therapy and meditation can help with that.

Harold is sent to audit Ana, (Maggie Gyllenhaal) a baker who is extroverted, loud, and aggressive compared to Harold. He is instantly attracted to her, but feels uncomfortable around her, and is afraid to move their relationship beyond professional.

Harold visits a psychiatrist after the narrator says he is going to die.

Mr. Crick, you have a voice speaking to you.

No. Not to me. About me. I am somehow inextricably involved in some type of story. I’m like a character in my own life.

It can help to distance ourselves from our thoughts by analyzing them as if they were said by someone else. Would we ever speak so harshly and be so critical of another as we do to ourselves?

After the psychiatrist fails to help him, Harold visits a literature professor (Dustin Hoffman).

With social anxiety, we often discount the friends and relationships we do have.

I told you you were going to die, you believe me?

I don’t know you.

But you don’t know this narrator either.

Although this is quite a different scenario, in real life, we shouldn’t believe the negative thoughts we have inside our own heads. Thinking that others won’t like us, when we don’t know that to be true, is what causes social anxiety.

Perhaps you should keep a journal, write down what she’s said to you or something.

Keeping a journal of our own thoughts can be helpful in overcoming social anxiety. We often don’t realize how ridiculous some of our thoughts are until we put them down on paper and review them.

Harold stammers and acts awkward in his interaction with Ana.

You uh… you… have… uh… very… straight teeth.

Harold quickly calculated the odds of making an ass of himself in ratio to the amount of time he stayed to chat.

Actually I should go.

We often try to calculate social interactions and predict what others will think of us, but our calculations are usually wrong. Our ratios of making ass of self : time chatting is disproportionate.

I haven’t even been on a date in three years.

I’m an auditor. Nobody likes me.

Harold displays the type of low self-esteem associated with social anxiety. We falsely assume others won’t like us. Then again, for Harold, it’s true. Nobody likes auditors. (Just kidding.)

After Harold spends the day auditing Ana, she offers him cookies.

I’m glad you liked them.

I uh… I did. Thank you for forcing me to eat them.

Harold was afraid to eat the cookies because he had never eaten cookies before, but after Ana forced him to eat one, he loved it. This is a classic example of exposure. With social anxiety, we are afraid to talk, but if someone forces us to (in a kind, gradual way) we will begin to fear it less and less.

Later in the film, Harold and Professor Hilbert have made no progress and are out of ideas, so they give up and accept that he is going to die.

You have to understand that this isn’t a philosophy, or a literary theory, or a story to me. It’s my life.

Absolutely. So go make it the one you’ve always wanted.

Harold goes out and does the stuff he’s always dreamed of. Like buying a guitar and learning to play.

With every awkward strum, despite his approaching demise, Harold felt a little more at peace.

This is another metaphor for exposure. Each time we put ourselves out there in a social situation, we will feel less anxiety and more at peace.

The first step to overcome social anxiety is to stop worrying about what others think. Then, the ultimate way to overcome a fear is to do that which you fear.

And with every strum, he became stronger in who he was, what he wanted, and why he was alive.

Harold finally gets the courage to go see Ana and tell her that “in no uncertain terms, he wants her.”

And in the end, (SPOILER ALERT) Harold doesn’t die. Proving once and for all that the voices in our heads feeding us negative thoughts aren’t always true.

Harold Crick is a quiet lonely man with clear signs of social anxiety. It’s remarkable how a charismatic comedic actor like Will Ferrell was able to portray such a nuanced introverted character so convincingly. (Just like Jim Carrey did in Eternal Sunshine of the Spotless Mind.)

The narrator in the film also serves as a sort of metaphor for the negative voices in our heads that cause social anxiety.

Ultimately, Stranger Than Fiction is a fun movie that provides a positive message for overcoming fear and anxiety.

Stranger Than Fiction as a film: 9/10

As a portrayal of social anxiety: 8/10

1 thought on “Social Anxiety in Movies: Stranger Than Fiction”