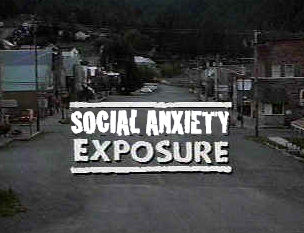 Years ago, at the depths of my shyness, I thought that the notion of exposure to curing my social anxiety was ridiculous. I’d been exposed to plenty of social situations before, but that didn’t seem to help me at all.

Now I realize my idea of exposure therapy for social anxiety was all wrong. It’s not about simply about us being around people who talk, it’s taking the action to talk ourselves.

The realization came to me when I looked back at my past. Because of social anxiety, close friends have been few and far between for me. But over the years, there were a few people that I felt comfortable talking to. Think back on your own past, and I’m sure you had somebody as well— that one school mate in the second grade— a brother, sister, parent, cousin, aunt or uncle— a teacher, coach, or whomever else. You know who I’m talking about. That one person that you felt like you were yourself with.

I always thought there was something special about those people. That it took a certain type of personality for me to feel comfortable enough with to talk to. That may be partially true. It does take a certain type of personality to have the patience to develop a relationship with someone with social anxiety. To give us the time we need to come out of our shell. But the other person’s personality isn’t the whole story. The real reason we are comfortable with them is simple exposure.

Think back to the very beginning of your relationship with that person. Were you completely comfortable and talkative with them at first? Probably not. I know I was just as shy with my elementary school best friend at first as I was with every other student in the class. He’d try talking to me, and I’d respond with shrugs or one-word answers to avoid talking to him, just like I did to every other student in the class. Whereas most students eventually gave up and stopped talking to me, this one friend kept talking to me for whatever reason.

Exposure is the reason for every other close relationship in my life, as well. That’s why people with social anxiety can live in the same house with two family members and feel comfortable talking to one and not the other. One family member keeps talking to us through that exposure period when we are evasive, while the other family member gives up. For this reason, it’s easy to put the blame on others and believe that it’s their fault for not pushing us to crack our shells.

But the fact is, we don’t have to rely on others to force us through exposure. It may be more difficult, but we can force ourselves through exposure with anyone. We don’t have to wait for that special personality to come around and talk to us. We can use the same exposure practice that we used with that childhood friend— one word, then two, a sentence, then a few— and eventually we’ll break through our social anxiety and be able to talk to anyone. It’s simple in theory, difficult in practice, but it works.

14 thoughts on “Is Exposure a Cure for Social Anxiety?”