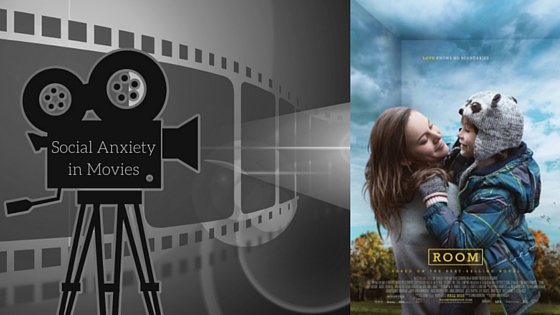 Room is about…actually, if you haven’t seen the movie, do not read this review until you have. Room is the type of film where the less you know about it going in, the more rewarding the viewing experience.

I repeat: DO NOT READ THIS unless you have seen the entire film. It’s worth it.

Room is about Ma (Brie Larson) and her five-year-old son, Jack (Jacob Tremblay), who are living together in a small room. We learn that Ma was captured years ago by “Old Nick” who keeps her captive in the room to rape her. She conceived Jack during that time, and he has lived his entire life in “Room.” It is all he knows of the world.

Eventually, Ma and Jack concoct a plan to escape Room, and it works. They are rescued. But that’s only the mid-point of the film. Ma and Jack are finally free, but they face a whole new set of problems, adjusting to normal life. This is where the social anxiety comes in for Jack. He’s never met any human other than his mother. He didn’t even know any other people existed in the world aside from himself, Ma, and Old Nick, whom Ma wouldn’t let see Jack anyway.

Early in the film, while locked in Room, Jack is very animated and talkative with Ma. Then in front of new people in the outside world, he is the opposite personality-wise—utterly shy and quiet.

Jack’s first day in the hospital, he hides from the doctor, and even his grandparents. When someone asks him a question, he whispers it to Ma because he is too afraid to speak to them himself.

Ma educated Jack in Room. He knows how to talk. But he is afraid to talk to other people because he’s never been exposed to other people before. In a way, Ma helps enable Jack’s social anxiety when he whispers to her, by telling others what he said. When we let others speak for us it becomes harder to speak the next time. Jack may have been better served if Ma told him he had to speak to them himself. Not in a forceful way, but kindly encouraging Jack to speak for himself. He may not have liked it at first, but it would have helped him overcome his fear.

With time, Jack starts to feel more comfortable around people. Leo, his grandmother’s new husband, makes a special effort to help Jack feel more comfortable. Sometimes it takes a special effort from others to help someone overcome their social anxiety. Most of the close friends I’ve had came from others being patient through my initial shyness and continuing to talk to me until I was ready to talk back.

Unfortunately, we can’t expect all people to be as patient and accommodating to our social anxiety as Leo was to Jack, especially when we are much older than Jack. Or if we are in a professional setting. But we can be the ones to make a special effort to force ourselves into gradual exposure.

By the end of the movie, Jack has made friends with children his age and talks confidently to his grandmother, the neighbors, and the doctor. He appears to be en route to a fully happy and healthy life, which is astonishing considering where he came from and what he’d gone through.

Having talked to no person other than his mother for his entire life, Jack had more reason than just about anyone to feel social anxiety. Yet he overcame his shyness through gradual exposure. I know it’s a fictional story, but it applies just the same to real life. If Jack could do it, so can we.

As a portrayal of social anxiety: 8/10