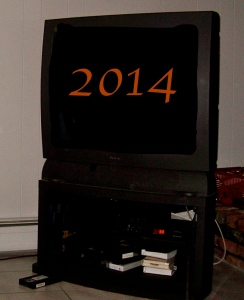 With 2014 winding down, it’s about that time that every blog on the internet is required to do best of the year lists. Why fight it? People love lists. There are still way too many movies I need to see before doing a top ten films list, so I’ll start with television. I obviously haven’t seen every TV show that aired this past year, but I have seen quite a few— probably too many. This isn’t so much a list of the “best” TV shows of the 2014, as my “favorite” TV shows that I’ve watched this year. And if you haven’t seen any of the following shows yet, don’t worry, there are no spoilers.

First off are the notable omissions— popular shows that I either didn’t like or didn’t watch.

House of Cards and The Newsroom: I watched the pilot of The Newsroom and the first few episodes of House of Cards, but I just never got into either show. I guess my lack of interest boils down to the subject matter of each show— news reporting and Washington politics— neither of which I’m overly passionate about.

Agents of S.H.I.E.L.D. and Gotham: I’m super-heroed out from all the Marvel and DC movies, and the antidote isn’t more superhero TV shows without the superheroes.

Orange is the New Black and The Americans and The Knick: Critically acclaimed shows that I haven’t seen yet, but may watch sometime in the future.

Homeland: It’s rare for me to abandon a show once I commit, but I had to pull the plug on Homeland after season 3. The first season was fantastic, but the series went on a steady decline ever since then. I’ve heard some good things about the fourth season, but I’m not sure if I’ll ever return to the show. There are just too many great shows on television these days, not to mention all the movies on my watchlist. I can’t waste my time on frustratingly uneven shows like Homeland.

Justified: This show definitely would have made my top ten, but I haven’t seen the latest season yet. I watched seasons one through four on DVD and loved them all, and I look forward to catching up with Raylan in season five.

Big Bang Theory and How I Met Your Mother: I refuse to watch any show with canned laughter. It’s 2014.

Now for the honorable mentions— the shows that I watched and liked, but that just missed out on making my top-ten.

Almost Human: Almost good… This show seemed taylor-made for me: Produced by J.J. Abrams, a sci-fi police crime procedural set in the future with androids. I hoped this show would fill the void of Fringe, but the characters, writing, and mystery plots were merely mediocre, which may explain why it was cancelled after one season.

Halt and Catch Fire and Turn: Two new AMC shows featuring interesting periods and settings: computers in the 1980s and spies during the American Revolution. I liked the characters of Cameron, the female hacker in Halt, and Simcoe, the British officer in Turn, but both shows were inconsistent and tended to drag at certain points throughout their respective seasons. I feel like both series would have worked better if compressed in a long movie or a short mini-series. Plus, both shows have horrible titles that tell you nothing about it, which couldn’t have helped their ratings. They remind me of another goo-but-not-great AMC period drama, Hell on Wheels, which I quit watching after its first season. Apparently both Halt and Turn are coming back for second seasons, though I’m undecided as to whether or not I’ll continue watching either.

Robot Chicken and Rick and Morty: Two fun animated comedies on Adult Swim. Robot Chicken always has dozens of classic movie and TV parody sketches that, if they were posted on Youtube, would probably be viral hits. Rick and Morty has a nice Back to the Future meets Doctor Who vibe to it, but given Dan Harmon’s involvement, I was hoping it would be better than it was. Plus, the voices of the titular characters (played by the same actor) were kind of annoying.

The Walking Dead: I loved Frank Darabont’s first season, but the show has gone downhill since. I was actually thinking about abandoning the show this year because it was getting too repetitive, and it didn’t feel like the series was going anywhere. But this past season was just good enough to keep me coming back to zombie-infested Atlanta.

Gravity Falls and Star Wars Rebels: Two Disney Channel cartoons that aren’t just for kids. Gravity Falls is a fun mixture of comedy, sci-fi, adventure, fantasy, and mystery that makes me nostalgic for the cartoons I loved to watch as a child. Cartoon Network’s Star Wars: The Clone Wars was underrated, and Star Wars Rebels seems to pick up right where that show left off. At times, it’s better than the prequels and gives hope for the new trilogy and spin-off movies.

Sherlock: I loved seasons one and two of the BBC show, but this past season, while still enjoyable, wasn’t quite as good. I do like the format of the series (three 90-minute episodes each season) and would like to see some American networks try something similar.

Parks and Recreation and Brooklyn Nine-Nine and The League: I enjoy all three of these sit-coms, but I have slight grievances with each show. 1. I’m sorry, but I just can’t buy Andy Samburg as an actual police detective. 2. I like the inside fantasy football jokes on The League, and I’m fine with a dirty joke or two, but their comedy sometimes tends to get a little too filthy and not enough funny. 3. Parks and Rec has one of the best casts on TV: Aziz Ansari, Ron Swanson (I know that’s not his real name, but he will always be known as Ron Swanson to me), and Chris Pratt— and neither of those three characters are even the stars of the show. I guess I don’t have any real problems with Parks and Rec other than The Office mockumentary gimmick, but the show just seems a bit overrated by some critics who seem to hail it as the greatest sit-com of all time. It’s no Seinfeld. It’s not even my favorite sit-com that aired on NBC last year. (Spoiler alert for my top-ten)

Hannibal: I can’t believe this show is on network TV, and not only because of its gore and violence. Brian Fuller has created one of the most visually stunning television shows I’ve ever seen, and the show has one of the most unique scores I’ve ever heard. Yet Hannibal remains on my honorable mentions list mainly because of its inevitable plot. They’re stuck telling a prequel story that we all know the ending to, and the few twists and surprises along the way aren’t enough to overcome that. Plus, I’m not a fan of Mads Mikkelsen’s portrayal of Hannibal Lector. He just doesn’t bring much to the role for me other than a foreign accent. I only wish this kind of visual flair and creativity could be brought to a new original series.

The Daily Show and Last Week Tonight: John Oliver’s spinoff is different but just as good as Jon Stewart’s original. But neither are quite as good as a certain other Daily Show spinoff. (Spoiler alert for my top-10)

Key and Peele: The first three seasons of Key and Peele featured some of the most laugh-out-loud funniest sketches I’ve seen since Chappelle’s Show, but this past season didn’t live up to their previously lofty standards. There were still plenty of clever sketches worth watching, but none that left my face hurting from laughter like the earlier seasons.

Family Guy: The show is in its thirteenth season, and a lot of people have stopped watching. They claim it’s not as funny as it used to be, which may be true, but I still enjoy the show. I especially like the way the Brian/Stewie relationship has developed in later seasons. Plus, there’s always at least one or two inventive and creative episodes each season that Seth MacFarlane seems to give his full attention to, like the Simpsons crossover or the time-travel back to the pilot episode.

Cosmos: It was great seeing a big-budget educational science show like this on network TV. I’m a fan of Neil deGrasse Tyson, and there were several truly mind-blowing moments both visually and informationally, but I would have liked the show better had they spent less time on animated history lessons and more time on the latest cutting-edge research and theories in astrophysics.

Louie: I’m not the biggest fan of Louis C.K.’s stand-up, but I’m really impressed by his show. There’s nothing else like it on TV. It’s definitely not a sit-com, and at times it feels more like a drama than a comedy. Each episode is like a Woody Allen-esque short film. I also love the meta aspects of the show and the cameos by other actors and comedians. The only reason Louie didn’t make my top-ten is because there are too many other good shows on television right now.

Stay tuned for my next post, which will count down the full top ten.