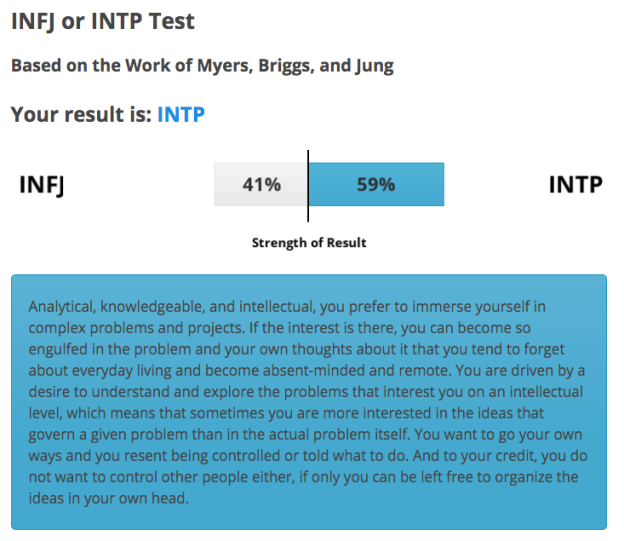 A couple of years ago I wrote about how I was an INFJ according to the Meyers-Briggs personality type indicator, but it turns out I might actually be an INTP. Back then I took several MBTI tests and got INFJ more times than not (though there was some variation). Now when I take the test, more times than not, I am an INTP (though again there is some variation, sometimes getting INTJ). The more I read about INTPs, the more that type seems to fit me. One thing is clear, however: every time I take the test, then and now, I am always firmly IN (Introverted and iNtuitive), it’s only the last two letters (thinking/feeling and perceiving/judging) that vary.

I took a specific INTP vs. INFJ test and the results (as seen above) were mixed: 59% in favor of INTP, so maybe I remain a little bit of both. I am firmly, near 100%, Introverted and iNtuitive in all the tests I’ve taken, which is perhaps why I can relate to INFJ, INTP, and INTJ—they’re all INs.

Some possible explanations for the variations in MBTI test results are:

1) When taking the test there are some questions that I’m on the fence about, not entirely sure of the answers.

2) I was wrong years ago (perhaps I didn’t know myself as well as I thought I did) and have been an INTP all along.

3) Some parts of my personality may have changed over time. This is quite possible as I have definitely become more “thinking” (rational and logical) and less “feeling” (emotional) over the past few years. This has been a conscious effort on my part. I was naturally more of a “feeler” but have trained myself to be more of a “thinker.” Many of my problems in life (and many of the problems I noticed in society, politics especially) resulted from thinking and acting based on feelings and emotions rather than reason. I’ve worked to become more rational, and it’s made me happier, more intelligent, and able to see reality more clearly.

4) The MBTI test isn’t very accurate or scientific in the first place, (which is something a INTP would think).

For this reason and others, professional psychologists favor the Big Five classification for personalities over the MBTI. The five traits are 1) Openness to experience, 2) Conscientiousness, 3) Extroversion, 4) Agreeableness, and 5) Neuroticism. Every individual has varying degrees of each trait. The Big Five scale is likely a better and more scientifically accurate assessment of an individual’s personality because it measures the aspects of personality that are more genetically ingrained and unchangeable than the MBTI captures.

I am high in openness, high in conscientiousness, low in extroversion, high in agreeableness, and high in neuroticism—always have been and likely always will be. As with the MBTI, there is nothing good or bad about any five of these traits. Each has advantages and disadvantages. I’ve written a lot about introversion versus extroversion. Society is generally conditioned to view extroverts as superior, but I’m quite happy to be an introvert and wouldn’t want to change.

As I said before, these personality tests are not all that important in themselves, but they can help you to understand yourself better—to recognize your strengths and weaknesses in order to improve your life.