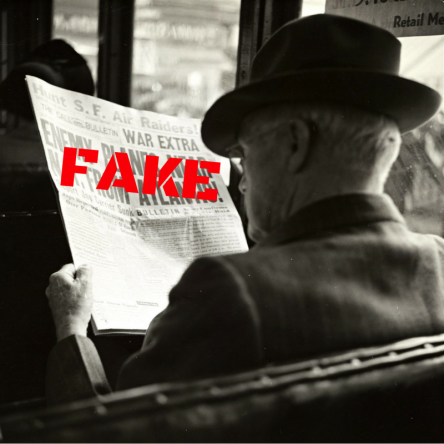 How do we know whether something we didn’t witness ourselves actually happened?

In the past, all knowledge and records were passed on orally, then later through books. Meaning facts could have been easily manipulated and fabricated as the storyteller saw fit. Therefore no history pre-photographs/audio/video can be taken at face value as empirically true unless there is archeological evidence or scientific proof. Otherwise, there is no way of knowing whether any account of history happened the way we were told.

But today, video recording of an event (barring editing manipulation) provides definitive proof that an event occurred. Plus, the internet allows free universal access to that knowledge. That’s such an extraordinary change for the human mind that we often take for granted. For most of human history, we never had that kind of direct news and historical evidence to show us what was actually happening in the world.

So much of news and history in the past was just here-say. You only knew what someone else told you, and you had no choice but to take it for granted. Add the fact that human memory isn’t very accurate to begin with. That puts most of the accounts of history (especially ancient history) into question. Either purposefully or by accident, much of what we believe to be true about history could actually be false.

However, today, with live video and the internet, it’s harder to spin false narratives (although dictators in countries like North Korea try by restricting access to the internet.) Then there’s the whole “Fake News” phenomenon, but that’s really more a case of people believing stories that they wish to be true despite any concrete evidence.

Soon enough, the policy will become, if there’s no video proof of an event then it didn’t happen. We’re basically already there. Just about everyone already has a smartphone in their pockets that can record video, and that technology will only advance in the future to the point that everyone is constantly filming everything they see 24/7 through optical implants. By then, the world will be a place of 100% transparency, where there are no secrets or conspiracies because everything will be available to view via live video recordings.

Although, at the same time, video editing and computer graphics will advance to such a degree that computer-generated video will be indistinguishable from real life. Then, history and real news will be virtually impossible to keep track of. Governments and corporations will use fake news videos and propaganda to spin history any way they want. Fake videos will look just as real as the real ones. No one will know what to believe.

Today, it’s sometimes difficult to separate fake news from real news. In the future, it will be virtually impossible.

3 thoughts on “Fake News and the Future of History”