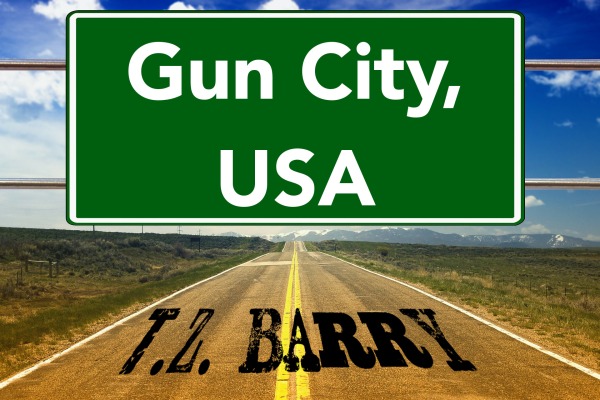 A short story about a drifter who picks the wrong diner to stick up.

The Drifter left the run-of-the-mill Midwestern diner with a fresh meal in his stomach and a wad of cash in his wallet. He got in his Mustang and sped west along the highway, off into the sunset.

He drove until his gas tank and stomach were both empty. At the next highway sign, he exited and drove into another mundane Midwestern town. He parked his Mustang in the lot of a dime-a-dozen diner and entered the joint with a six-shooter in his pocket, looking to pull off another easy score.

The Drifter took a seat at the counter and ordered his usual meal: a deluxe cheeseburger with cheese fries—both cheeses yellow American—and two drinks: a Budweiser and Coca-Cola Classic. He drank the beer while he waited and saved the soda to wash down his food, not wanting the bitterness of the beer to interfere with his juicy burger and salty fries.

The Drifter looked around the 1950s retro-styled diner, casing the scene. He knew all the customers, though he had never met any of them before. Like a Shakespeare play, diner to diner, across the country, the names and faces changed, but the characters stayed the same.

A divorced middle-aged waitress walked the floor from table to table. Behind the counter in the kitchen was the owner who doubled as the cook and knew each customer by name. The high school quarterback on a date with the head cheerleader sat in a booth by the jukebox. The town drunk sat at the counter with his best friend, Jack Daniels, and a shot glass. At a table for five sat the model nuclear family enjoying their one night a week when the wife didn’t have to cook dinner for her husband and three children, ages twelve, ten, and eight. The only cliche missing from the scene was the policeman on break, drinking coffee with a slice of apple pie, though his absence was just fine for the Drifter.

“Where you from, stranger?” asked the drunk.

The Drifter ignored their attempts at chit-chat and finished his meal in silence. He always kept a low profile, not wanting any of the townsfolk to remember his face or name. For dessert, he drank another beer as the waitress tore his bill from her pad and placed it on the counter.

The Drifter reached into his pocket, but instead of his wallet, pulled out his Colt revolver. “Empty the register,” he said, aiming the silver barrel at the waitress’s apron.

“You picked the wrong town, boy.” The drunk cackled with laughter.

The waitress opened the cash register, but instead of grabbing the money, she grabbed a 9mm Smith and Wesson pistol of her own and pointed it at the Drifter’s head.

The simultaneous sound of triggers cocking ringed throughout the restaurant like an orchestra of violence. The Drifter looked around at the diner crowd he thought he knew.

The cook aimed a Remington shotgun through the order window from the kitchen.

The quarterback held a Winchester; his girlfriend a Browning rifle.

The mother and father wielded matching pairs of his and hers Glocks. Their two young boys aimed their AK-47’s at the Drifter’s back, while their younger sister hid under the table with her pink PPK.

The drunk sat on his stool, shaking his head as he poured himself another shot. Everyone else in the diner was on their feet, armed in a classic standoff with no one willing to give in.

The Drifter pulled the hammer back on his Colt revolver, despite the fact that the six-shooter was not even loaded. He never imagined he would actually have to use the gun after robbing dozens of diners across the country without so much as a hint of resistance.

“What is this place?” The Drifter grew with anxiety. He backed away from the counter swinging his firearm around the diner, unsure where to point it. He bumped into a chair from the family’s table, looked down, and saw the daughter crouching on the floor. The Drifter grabbed her by the arm, and the PPK slipped from her hand. He used the girl as a human shield, holding the cold metal barrel of his empty revolver to her head.

“Give me the money, or I’ll pull the trigger!” he shouted.

“Just pay your bill and get on out of here,” said the cook while keeping a steady aim with his shotgun.

“Are you people crazy?” The Colt trembled in the Drifter’s hand. “I’ll—”

“Don’t you know where you are, boy?” The drunk downed his shot of whiskey then drew a .44 Magnum from his back waist. He twirled the gun around his finger as he spun around in his stool then faced the Drifter and cocked his Magnum with a grin. “This is Gun City.”

On his way into town, the Drifter had ignored the roadside sign reading, “Welcome to Gun City, USA, Population: 762.” Even if he had noticed the sign, it didn’t indicate the number of registered firearm owners in Gun City: also 762. Nor did it display the number of police officers: zero. There was no jailhouse in the town either—no need, since there hadn’t been a crime committed in Gun City since its founding. The citizens policed themselves, and no one dared betray another, knowing they all bore arms.

“Just let the girl go, and pay your bill,” repeated the cook.

The diner crowd circled around the Drifter like vultures. Feeling the weight of the nine gun barrels aimed at his head, he realized the mistake he’d made. There was no choice but to give in and square his bill.

“Alright, you got me.” The Drifter released the girl and reached for the wallet in his back pocket—

The diner exploded with gunfire.

The drunk discharged his Magnum, but he was no better shooting while intoxicated than he was driving.

Shotgun shells showered from the cook’s Remington, its shrapnel impaling the waitress en route to the Drifter.

9mm bullets from the waitress’s Smith and Wesson flew across the diner at the Drifter then continued toward the high school couple caught in the crossfire.

The married couple emptied the chambers of their Glocks, half of the shots hitting the drifter, half hitting the drunk and the cook.

The couple’s sons held their fingers pressed to the triggers of their AK-47’s, but the recoil of the powerful assault rifles sent the brothers spinning in circles like ballerinas, the contents of their cartridges cascading into each other.

The brothers’ younger sister laid on the floor under the table by the door where she’d dove to since the shooting started. After the gunfire ceased, she stood and looked around the diner clouded in gun smoke and puddled with blood. She was the only one left standing. The cook, waitress, quarterback, cheerleader, her parents, brothers, the drunk, and the Drifter all laid lifeless, full of each other’s bullets.

The eight-year-old orphan picked up her pink PPK and exited the diner to Gun City, USA, Population: 752.